What are programming languages?

Just like everyday people talk to each other in different languages, like English, French, Italian, Spanish, etc., different programming languages allow computers to communicate and pass instructions to each other to perform an action.

What is a program?

Sometimes, just one instruction doesn’t achieve the desired action. Instead, a series of instructions is needed to complete the objective. When these instructions are written as a step by step process, it’s called a program.  Programs allow us to instruct a computer, process data, or convert user input into something on the screen. Internally, the computer processor exchanges electrical signals back and forth to process data.

With Java, we can write these instructions in an elegant and simple manner. Most instructions are very clear to read and understand. The computer takes care of translating a program into the electrical impulses that the processor can understand.

Java is an object-oriented language, statically typed and compiled into Machine code. Let us define each of these foundational terms:

Object-oriented languages empower us to define objects and access their properties in our code. We can also send messages to objects.  We can create and manipulate all sorts of objects to do different things in our applications.

Now, let’s get started with the basics.  First, we must understand how the instructions we write are passed to the processor on a computer.

Briefly explained, we: 1) write code in a text editor, 2) save it in a format that the compiler understands with a “.java” file extension, 3) javac (java compiler) converts this to a “.class” format file (bytecode – class file), and 4) JVM executes the .class file on the operating system.

Always remember Java is not the base language that the operating system or a processor understands.

Source code written in Java is interpreted by the operating system using a translator known as JVM (Java Virtual Machine). JVM cannot understand the code that we write in an editor, it only understands compiled code. Hence, our need for a compiler.

The process, step-by-step, is: 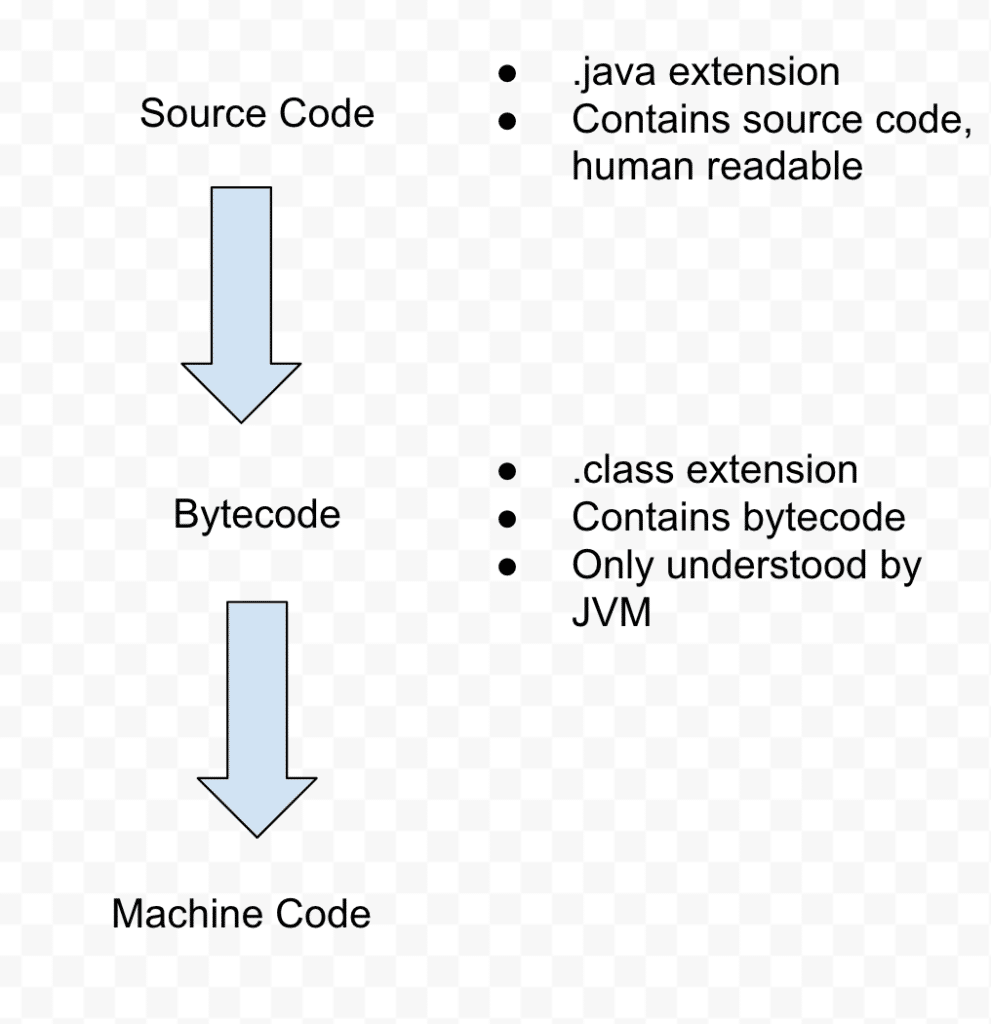 As previously mentioned, when we define variables in Java, we must first assign a data-type to the variables, before any compilation happens. We have different use-cases to hold data.  We will briefly define what data types exist in Java and what type of data they hold.

As an example, we can create a String variable, by typing:

Here, myName is a “container” which will contain data of type String.

The first four data-types are fairly simple and straightforward. Note, the “S” in String is capital because String is a more complex (or interesting) data type. Strings are actually objects, and the naming convention in Java is that object names should start with a capital letter. An object is different than a primitive data type because it has more complex properties and methods available to it, whereas the primitive data types are limited and straightforward. For instance, the String object has a method called length() that tells us how many characters are in the String, but the float data type does not have any such method capability.

As we mentioned earlier, variables are like “containers” of data which hold a particular type of data, one that we need to declare before putting data into it. If we violate that declaration, our program will not pass the compilation stage.

Let’s break the above statement into parts and examine each part carefully.

Here is a simple example of how the other data types are used:

Note the ‘f’ at the end of the float. This tells the compiler that the type is a float and not a double. Also note that char values are surrounded by single quotation marks to differentiate them from String values, which use double quotation marks.

Often, we concatenate pieces of text to each other. For example:

Whenever we want to reuse a bunch of code, we group it together in a method. A method is like an I/O device. It takes input, does processing on the data, and provide us with an output.

Let’s examine how the length() method for a String object is used to count the number of characters in a String.

Let us more closely examine each part of this method declaration:

To use the method we defined above, we need to call it with an object.

We have a String which has 36 characters. We call the method on the next line using dot notation, which places a period after a Class or variable name. This dot tells the method, which object it should check.

We store the returned value in a new int variable named textLength.

Many times, we need to remember what our code does and how the logic works the way it does. We have the ability to add notes to our code and/or mention the algorithm we used to solve the problem, using Comments.  Comments in Java are lines of code that do not affect how the program runs.

Single-line comments begin with two forward slashes: //. Everything on the line after the forward slashes makes up the comment and is completely ignored by the program.

Leave your comments below.  See you next time.

Do you want to learn more about SwiftUI and Build Apps?

I'll be putting together a comprehensive course on SwiftUI.  If you want to be a part of the course when it's ready, go ahead and enter your email.
You'll be notified when it's ready!
*Terms and conditions apply.

Powered by Convert Plus